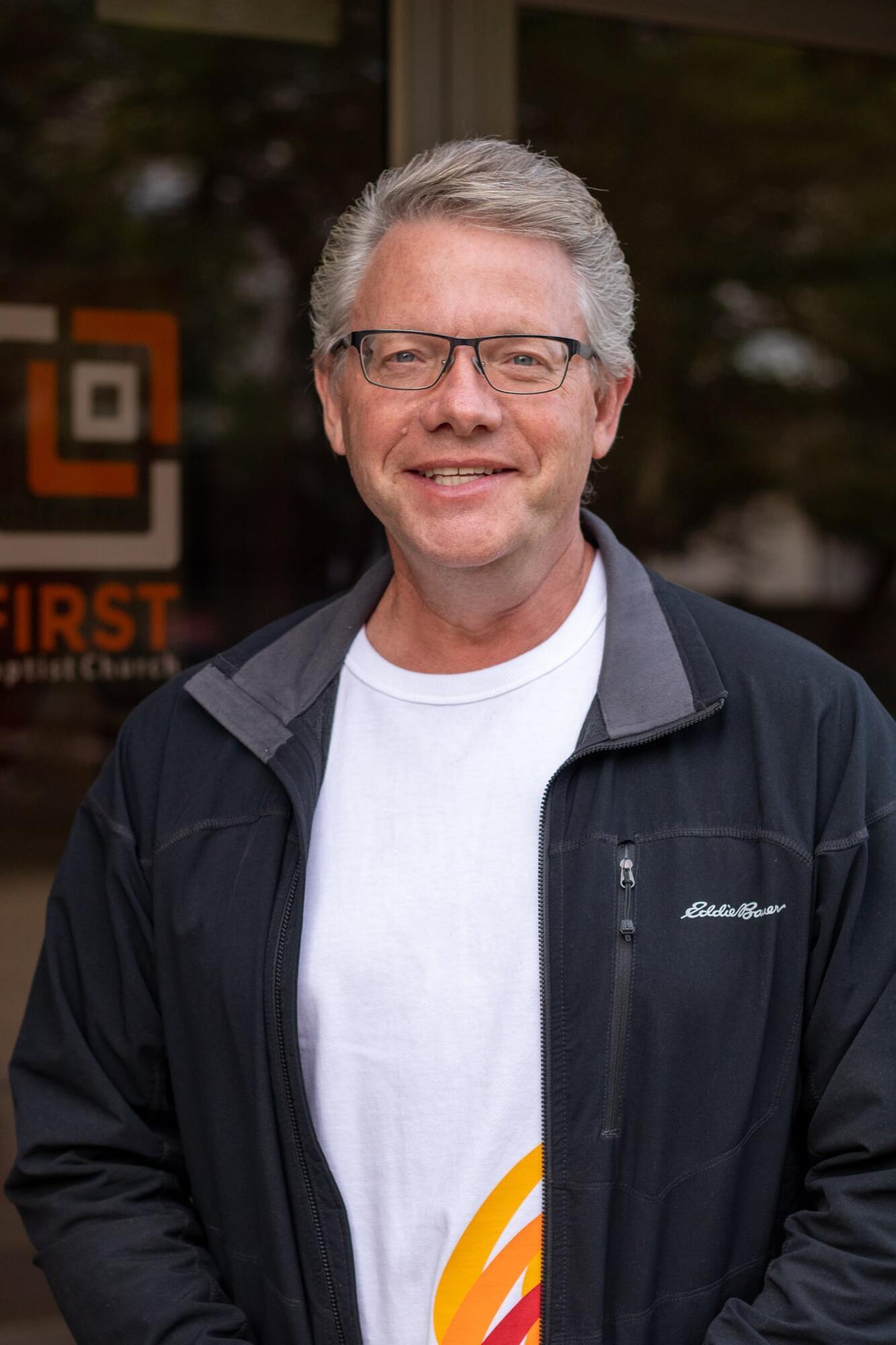 Doug grew up in the best place on earth – Lloydminster! He lives in his childhood home with his wife Fran. Doug and Fran also have four adult children Joel, Tori, Craig, and Brent. Doug has attended FBC for his entire life serving in a variety of areas including Pleasantview Bible Camp, young adults, music, and the elders board. Doug continues to volunteer at FBC as an adult small group leader and has a standing gig serving burgers on registration days at Pleasantview Bible Camp and other FBC BBQs. Doug has previously served our community as a member of the Lloydminster Kiwanis Club, the Lakeland College University Transfer Advisory Committee, and the Downtown Business Association. Doug joined the staff as executive pastor in 2005 and became the lead pastor in 2015. Recently, Doug became the longest serving pastor in the history of FBC! Doug has a B.A. from the University of Saskatchewan and is working on his Master of Divinity from Northwest Baptist Theological College and Seminary. He is passionate about serving FBC because God loves this church and he does too! 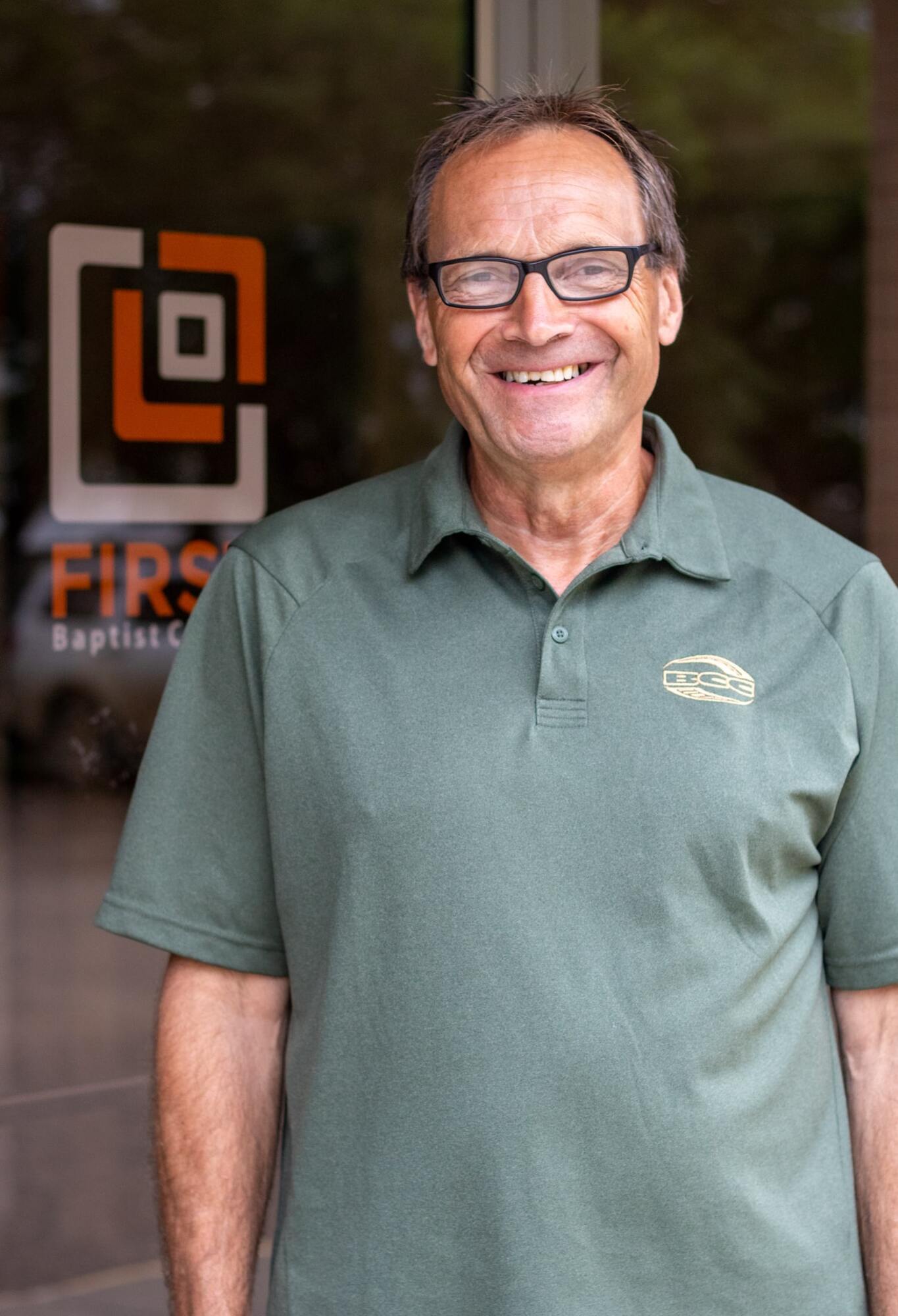 Kenton grew up in McGregor, Manitoba and made his way to Lloydminster as a young adult where he owned and operated Kenton’s Moving for 25 years. After attending FBC for almost three decades, Kenton joined the staff team in 2010 as the director of outreach which includes directing Pleasantview Bible Camp. Over the years, Kenton has volunteered with children and youth at FBC and currently serves as an adult small group leader. You will find Kenton in our community volunteering on the Cutter Rally for Cancer Committee combining his concern for people with his love for horses. In his spare time, Kenton enjoys camping, horseback riding, and canoeing. He and his wife Sandi also enjoy spending time with their four married children and their 17 grandchildren. Kenton’s prayer for himself and for those who participate in FBC and PBC is Proverbs 3:5-6: “Trust in the LORD with all your heart and lean not on your own understanding; in all your ways submit to him, and he will make your paths straight.”

Gord is passionate about the local church as the family of God and the body of Christ – the primary vehicle that God has chosen to do his Kingdom work in this world! Gord was raised in various communities across Alberta and British Columbia as the son of a pastor. He has a B.A. in Pastoral Studies and an M.A. in Christian Ministries from Briercrest College and Seminary and joined the FBC staff as associate pastor of administration in 2016 following 28 years working in student development at Briercrest College and Seminary. Over the course of his life, Gord has volunteered in other churches with children, students, and seniors and served on church boards. Gord currently volunteers at FBC as an adult small group leader and as a marriage mentor along with his wife Terry. Gord and Terry have three married children and seven lovely grandchildren with whom they enjoy spending much of their time. Gord also enjoys fishing and cheering on the Oilers! 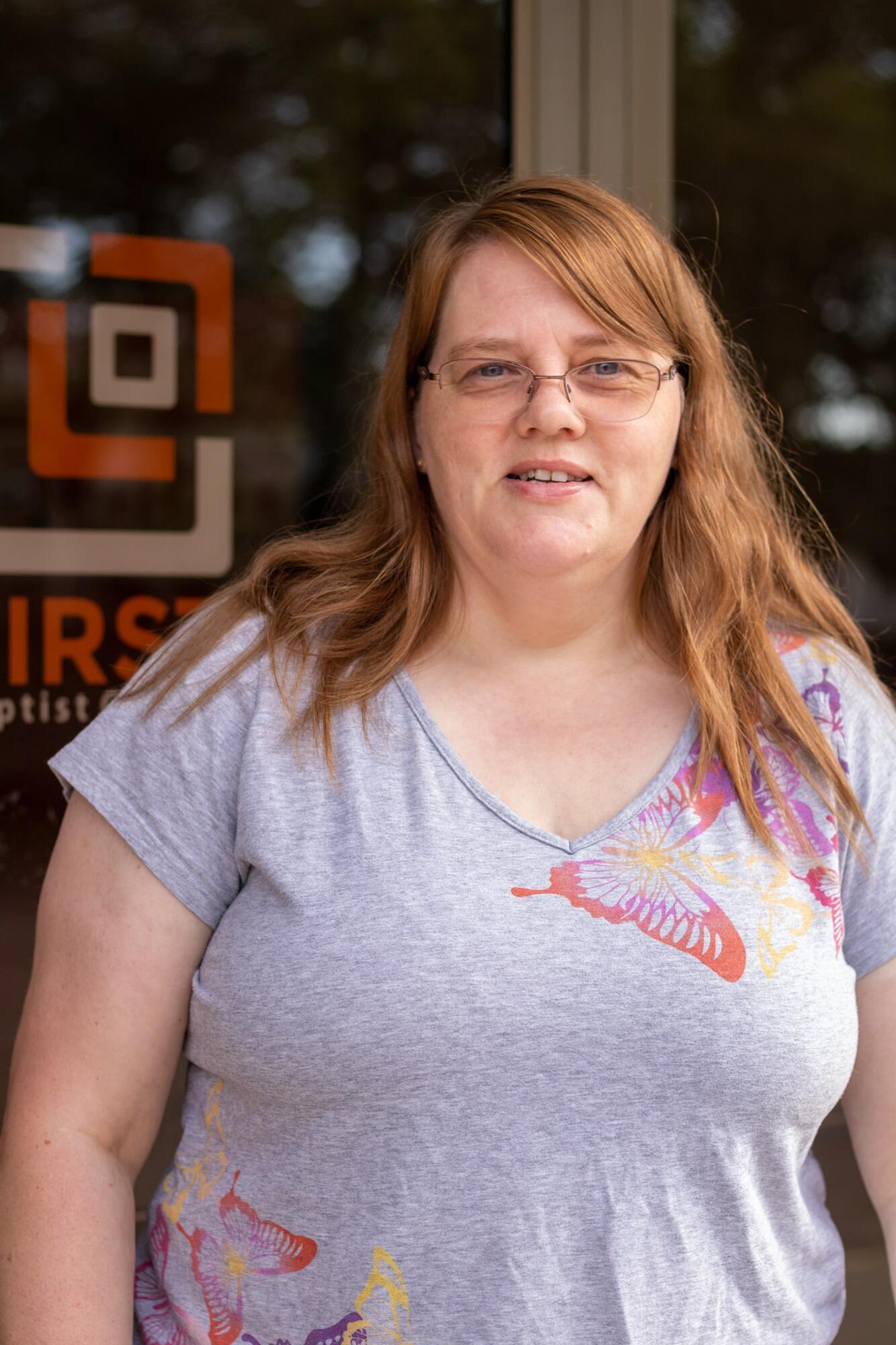 Wendy grew up on a farm outside of Unity, SK and started attending FBC in 1991. She became the custodian in 2014 after investing many years in homeschooling her now adult children Kendall, Michelle, and Courtney. Over the years, Wendy has served as an FBC KIDS small group leader, nursery coordinator, and adult small group leader with her husband, Wade. Wendy continues to volunteer in the nursery and Wade and Wendy have cooked at Pleasantview Bible Camp for the last several years. As a member of the FBC staff, Wendy enjoys getting to watch new families grow in their relationship with Jesus. Outside of work, Wendy loves animals. Her family has two dogs, Cuddles and Snuggles, and one cat, Tommy. She also enjoys playing all sorts of games with family and friends.

Bruce grew up 4,000 kilometers away in Rothesay, New Brunswick. Bruce has an Advanced Biblical Diploma from the New Brunswick Bible Institute and many years of experience in vocational ministry. Bruce has previously been involved in kids, youth, young adults, and camp ministries and has a great passion for all of these areas. Bruce and his wife, Amanda, moved to Lloydminster in 2021 from Truro, Nova Scotia to fill the role of Associate Pastor at FBC. Bruce is excited about diving into adult small group ministry and is very excited to connect with the community! Bruce and Amanda have two adult children, Parker and Brayden. In his spare time, Bruce enjoys board games, mountain biking, and basketball. He volunteered as a basketball coach for a number of years,
so he must be a pro! 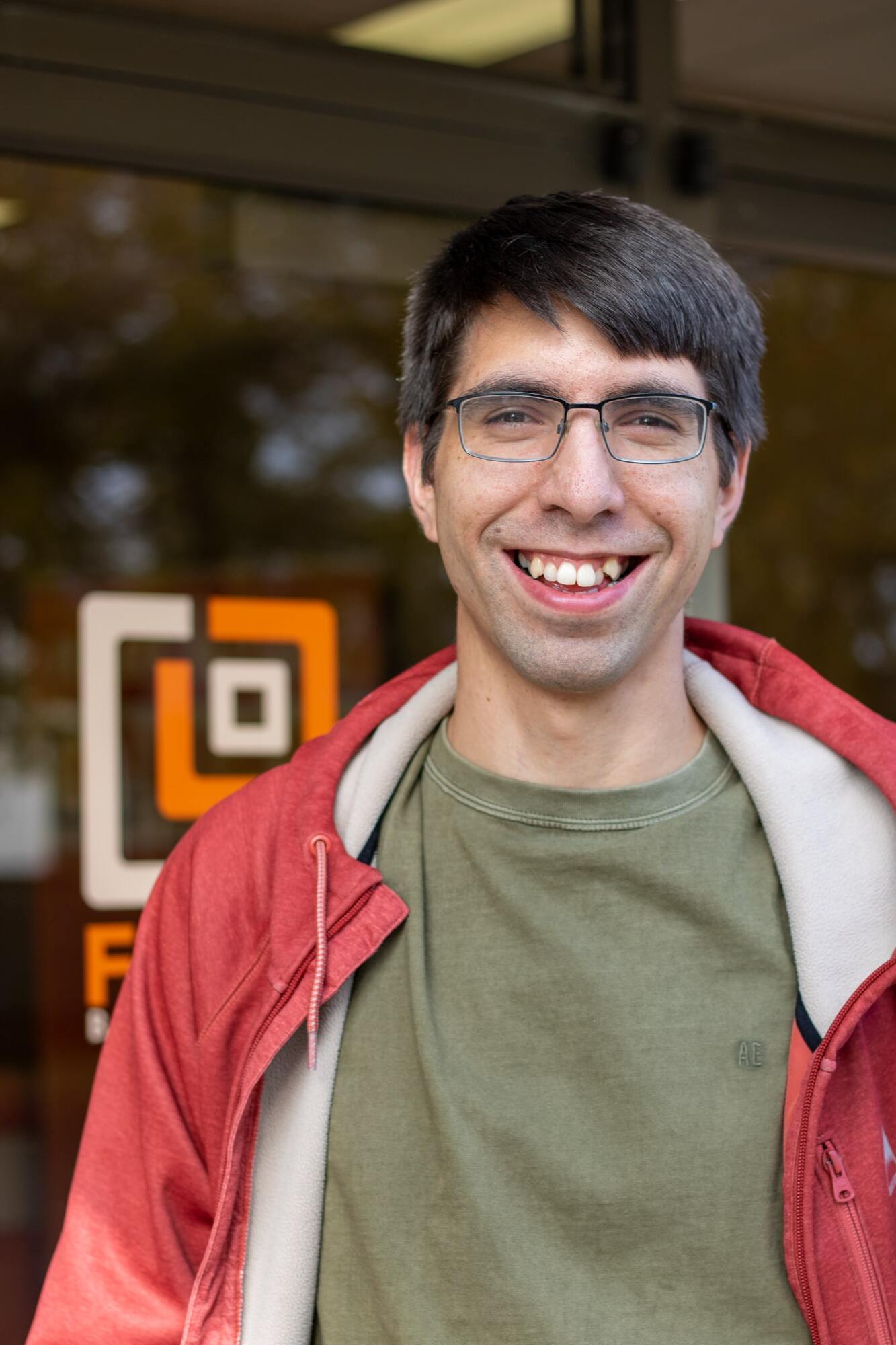 Avery grew up in Prince George, British Columbia and moved to Lloydminster in the fall of 2020. He and his wife, Amanda, have five children - Naomi, Caleb, Oliver, Ryan and Isabel. Avery has a journeyman ticket as a sheet metal worker and received a Bachelor of Religious Education (BRE) from Peace River Bible Institute in 2020. He has volunteered in many capacities in previous churches as a kids leader, youth leader, adult small group leader, and usher among other things. He has also worked in camp environments as a cabin leader and on maintenance crews. Avery is passionate about serving at FBC because he has the opportunity to equip youth, their leaders and their parents! He also is excited to help build up the body of Christ (Ephesians 4:11-16). In his spare time, he loves to read and play board games – “all things geeky” as he would say! 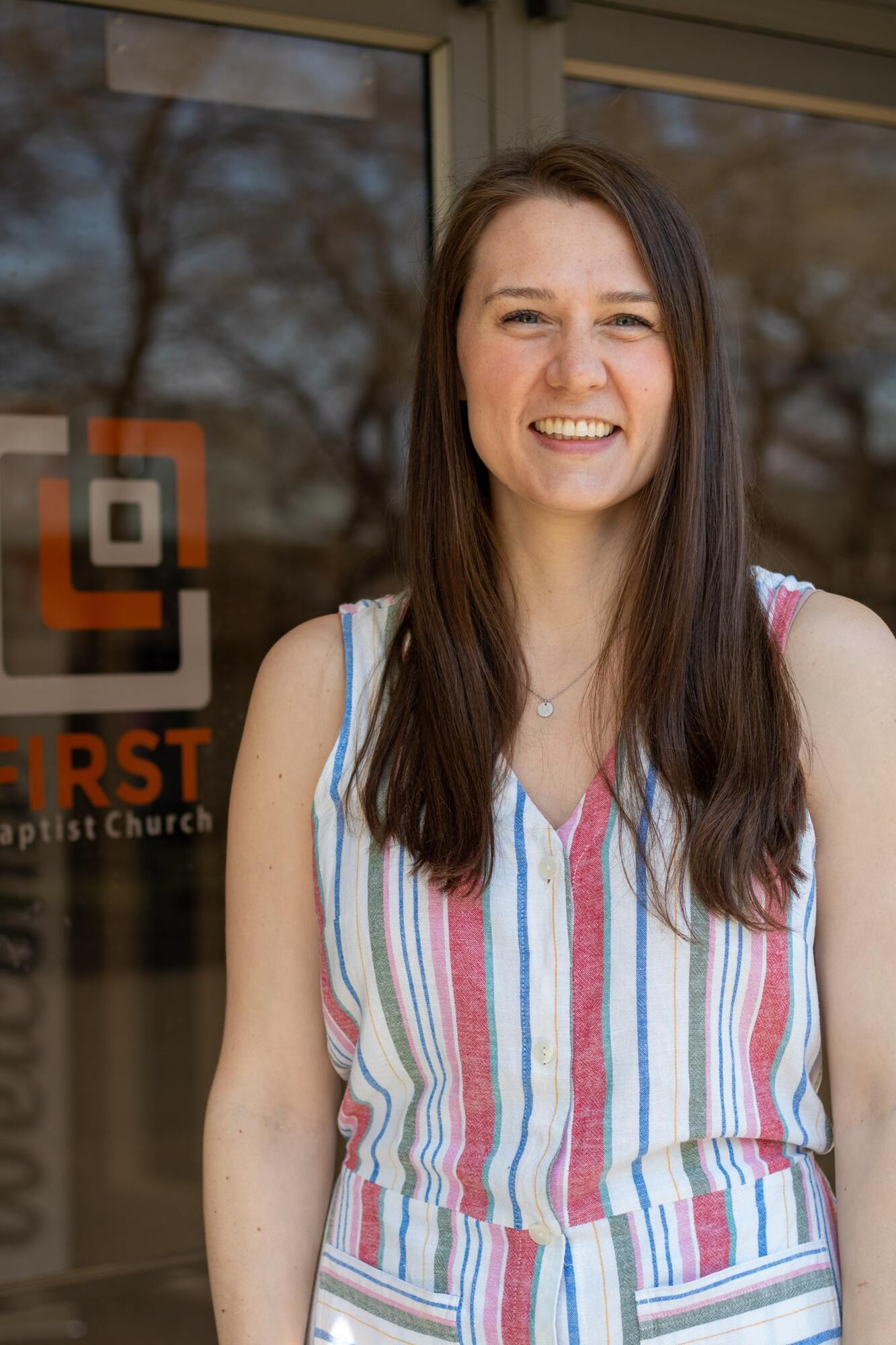 Jana left her career as a speech-language pathologist in 2016 to join the FBC staff as the office administrator. Jana grew up on a farm outside of Preeceville, Saskatchewan and attended Bethany College, the University of Saskatchewan (B.A.), and the University of Alberta (M.Sc.). Jana settled in Lloydminster in 2015. She has enjoyed participating in the life of the church in various roles within FBC KIDS, FBC Young Adults, small groups, and Pleasantview Bible Camp. Jana is passionate about using her administrative gifts to lighten the load for others who can then in turn use their gifts for God’s Kingdom. Outside of work, Jana is a foster parent and serves as the president of the Wainwright/Lloydminster Foster and Kinship Association. She is honoured to partner with people through some of the hardest times in their lives by sharing her home and heart with children in care and their families. Her secret nerd passions are linguistics and anything to do with organization.

Director of Children and Family Ministries